President of Injibara University, Professor Berhanu Belay, welcomed the guests and gave explanation about the main gate university, Kossober.  In his explanation, he mentioned that the main gate is named as ‘Kossober gate’ to remind the former name of the town and keep it unforgettable. 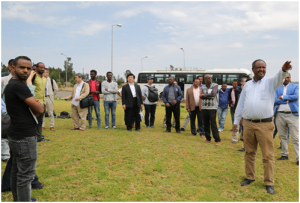 During the visit, Berhanu Belay (Prof.) and other concerned IU members were giving explanation about each of the places mentioned. They described on how each started, progressed and reached to the level they are now within two and half years, which is the age of the university.

Tatsuki Toda, Professor at Soka University, said Injibara University is progressing very well and has made great changes within short period of time. He also congratulated the University for its success.